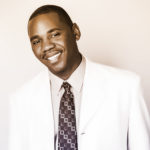 Since age 5, John Redmon has had a deep love and appreciation for music. His mother, Cynthia Redmon, an accomplished pianist, took him under her wing and taught him the musical art, encouraging him to play alongside of her in various church services. By age 12, he was not only being encouraged by his mother and other piano instructors to play both by ear and sight, but also to compose original works.

By 1994 Redmon decided to not just compose but house his original works within his own independent record label and named the company Reaching Records. The label’s purpose and motto was to ‘reach and touch hearts around the world.’ For the next twenty years, he did just that by producing and releasing multiple projects on his label that eventually gained national and international attention and recognition, including: A Woman’s Journey (featuring Grammy Award Nominees Vickie Winans, Brenda Nicholas and of course a motivational testimonial from his own mother Cynthia Redmon), John Redmon & Friends: Faith, Love and Unity, Volumes 1, 1.1(featuring BeBe and CeCe Winans, Daniel Winans, Phil and Brenda Nicholas and Grammy Award winner Patti Labelle), S’Agapo (I Love You) – his first R&B / Pop Album which included covered the Whitney Houston classic “All At Once”, and his biggest and most successful/notable single release Thank You Lord (Story of the Shunamite Woman) that was highlighted at a Jimmy Swaggart Easter Conference.

In 2015 he started The Piano Series under his label and not only recorded his Christmas Classics, Gospel Classics and Hymn Classics albums, but set up a tour to promote the records. Some of his special guest artists who dropped by to perform at his special events included George Sisneros, Ron McMillon and Thomas Dawson, Jr. music director of the Commodores.

In 2016 Redmon performed The Star Spangled Banner at the Pepsi Center at the Nuggets vs Cavaliers game on February 21. In this same year, he created and hosted a weekly radio show called Matters of the Heart on JBCM radio that dealt with painful testimonials and sensitive, current issues that were sealed with hope. Some guests included: Grammy Award nominee Rodney Friend, Hollywood actress Linda Purl and his most popular interview to date…his mother Cynthia Redmon.

In 2017 Redmon and Thomas Dawson, Jr. had a vision. The vision was to give children a voice, a pulpit, and a platform to sing, minister, testify, preach, pray, teach and evangelize the world for Jesus Christ. Believing that children have a voice and should not only be seen but also heard, Kids Love Jesus Too children’s praise and worship album was born and a movement began. The album highlighted kids of all ages from around the nation proclaiming their love for their Jesus in song, word and testimony. Guest artists included: Tina Lewis-Glenn, Theresa Morton, Phil & Brenda Nicholas, Katie Reeves, and Delaney Chough. Infectious songs like Little Things were birthed from this project and a kids tour was underway.

Redmon has toured all over the United States and England with his inspirational messages found in both word, song, instrument and voice. He testifies and believes that his latter days are going to be greater than his past. His charm, professionalism, passion for both humankind and his music along with his disarming, radiant smile and infectious laugh makes him a favorite amongst both his audiences and fellow musicians.

• 2016 Performed The Star Spangled Banner : Live at the Pepsi Center, Denver CO for the Nuggets vs Cavaliers game

• 2009-2010 Inducted in Cambridge Who’s Who Amongst Professionals, Executives and Entrepreneurs

• 1997 Redmon’s original patriotic tune America! was given accolades and two thumbs up from Senator Dianne Feinstein